So, I thought I would do something fun and start writing a regular post every 2 weeks that focuses on a particular colour. I will also include pics showing all sorts of vintage fashion items that were produced in varying shades of that colour, hopefully to inspire some new outfit combinations in the future. 🙂

Burgundy. It’s rich, dark, sensual and one of my favourite clothing colours, along with darker greens, browns, rusts, reds, black and navy. I’m not much of ‘bright colour’ girl (much to my father’s disgust…he always comments that I ‘wear too much black’) and I tend to accessorise with brighter pieces or wear a bright shirt with darker skirt/trousers etc. Burgundy usually screamsÂ winter and autumn to me but I do have items in cottons and linens in lighter shades and funnily enough; a pair of vintage suede burgundy lace up oxford shoes! Hope you enjoy this collection. 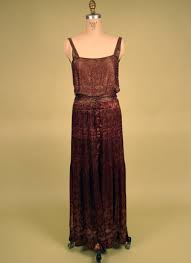 Gasp! I must right this wrong immediately! One of my all-time favourite shows:

In a way, it was a classic: combining the indelible fifties inspiration of Lisa Fonssagrives, Dior mannequin and wife of Irving Penn, and that of the new model of French conservative chic, Carla Bruni-Sarkozy. Those two streams of thought merged into a collection John Galliano called “fresh coutureâ€”restrained and refined.” If it didn’t exactly result in 100 percent conventionality (there were plenty of sheer skirts and fetishistic patent belts that might not work at a political summit), the happy fact that the first lady of France has chosen to dress at Dior gave Galliano full rein to revel in the realms of glamour the house established 60 years ago.

The templates were all there: big coats, wasp waists, nipped jackets, circle skirts, tulle dance dresses, architectural gowns cut from spiraling lace and jutting scrolls of crin. Mostly framed in black and white, with tints of gray, caramel, Parma violet, mint, and chartreuse to follow, the shapes traced familiar silhouettesâ€”albeit a familiarity shot through with Galliano’s irrepressible touches of perversity. A nod to Dior’s New Look peplum became a stiff patent hip-jutting belt with cross-lacing in the back, and a knowing acknowledgment of the basis of the hourglass silhouette came in a couple of see-through gowns with the corsetry fully on display. Still, this was Christian Dior very much under control and within the scope of reality. Add some lingerie and take off the belts, and it’s no stretch at all to imagine Madame Sarkozy finding plenty here to wow the world in her demure manner, come fall.

For one reason or another I finally decided to start watching Gossip Girls and I must admit that it’s my new guilty pleasure. The wardrobe is fantastic!! Quick synopsis about the show from what I’ve seen so far: filthy rich high school kids (eventually college bound), teenage drama/angst, love triangles, and the most ridiculous wardrobes ever!

Here is Blair Waldorf in a dress by Reem Acra Pre-Fall 2009 in “Enough About Eve”.

Another stylish outfit from the episode “New Haven Can Wait.”

You can buy this dress at Natasha Bailie Vintage Clothing Company.

And finally (a repeat),

Based on a true story, and one that isn’t largely known. Angelina Jolie stars as Christine Collins, a single mother working in 1928 Los Angeles when her son goes missing. A boy is returned to her months later by the police, but she is shocked when she realizes that the boy isn’t her son. Joined by a crusading pastor (John Malkovich), Christine battles for justice against the corrupt L.A.P.D. while she continues to search for her child. Eventually her fight against the cops lands her in a mental hospital, where she is surrounded by others with a similar plight. Directed by Clint Eastwood.

To read more about the true story: The Wineville Chicken Coop Murders.